* The following article was originally published in Visión Doble (August 2018). The journal published it in both Spanish and English. It is republished on El Site for documentation purposes, and with Visión Doble's permission. *

AQUÍ was a design-based placemaking event that took place on June 11, 2018 at the University of Puerto Rico School of Architecture. It welcomed members and allies of the LGBTQ community—from within the Rio Piedras Campus and outside—to create a series of site-based posters that asserted the presence of queer identities in physical places and claimed a space for them in our built environment. As part of my research project funded by FIPI, which seeks to explore queer spatial practices in Puerto Rico, AQUÍ queered our School of Architecture's spaces through these crafted expressions, giving visibility to non-heteronormative stories and experiences while placing them in key locations that either resonated or challenged the building's established meanings.

The AQUÍ posters prompted architects and architecture students to validate queerness within architectural discourse while advocating for Puerto Rican spaces that cater to diversity and inclusion, particularly when in Puerto Rico, the architecture discipline has been unconcerned with creating an architectural record, history or theorization of LGBTQ spaces and practices.

An enormous interior patio with an empty fountain in my aunt Violet's house: one of the magical places of my childhood. The hallways around the fountain were equally as hypnotic.

The screens that protected the galleries from sun and rain invited me to gaze between their geometric lines, fragments of bodies and movements. Between those lines I observed, for the first time, the affection between people of the same sex. My eldest uncle and his companion fleetingly kissed in that gallery, unknowingly observed. Between lines and spaces their love transpired.
[translation]

Indeed, Javier E. Laureano’s book San Juan Gay: Conquista de un espacio urbano de 1948-1991 stands on its own in its creation of a general historical account of the spaces where Puerto Rican gay culture unfolded during the later part of the twentieth century. Although San Juan Gay creates an impressive list of LGBTQ spaces and their locations, it only begins to scratch the surface for further concerns, questions and theorizations related to architecture and urbanism. In his book, Laureano explains that part of the difficulty in creating a comprehensive history of non-normative spaces in the capital is that Puerto Rico’s gay history is dislocated, marginal and silent—partially due to the criminalization of homosexuality up until the mid 70s, and partially due to the migration of LGBTQ citizens, scholars and artists to the United States. Laureano is careful in overemphasizing the importance of giving these citizens too much visibility and mapping out their spaces, upholding that queer invisibility is a strategy for survival and self-protection, but he also seems to rather indecisively straddle the line between vouching for a degree of invisibility and calling for researchers to preserve, rescue and discuss these silent, invisible histories.

There are problems in maintaining ambivalence in Puerto Rico’s queer, spatial discourse and in the lack of its intellectual, architectural production. As environmental planner Gordon Brent Ingram et al mention in their book Queers in Space: Communities, Public Spaces, Sites of Resistance, “A major criticism is that queer theory presents a canon written largely by white and decidedly Eurocentric males and therefore excessively reflect their ideas.” Puerto Rico finds itself in an advantageous academic position, in which although homophobia still exists and is kept very much alive by various cultural and political sectors, we are able to freely practice—and research—queer identities without the fear of criminal persecution, which is still a problem lingering in 73 countries across the world. In this way, from our Caribbean region, we can contribute to a much-needed global discussion of alternate, non-white queer practices, spaces, politics, desires, communities and aesthetics.

While I, by myself, went up the stairs, a professor greeted someone who, judging by their gaze, must have been very close behind me. There, I realized that someone had been discretely following me. Having now been seen him, he timidly asked me my name. That night I received a Facebook poke from him.

Informed by the work of feminist theorist and architect Jane Rendell in her book Site-Writing: The Architecture of Art Criticism, the posters created in AQUÍ sought to act as starting points for this discussion on the architecture of Puerto Rican queerness by drawing on the participants’ spatial experiences, memories and subject-positions. In Site-Writing, Rendell considers the site—i.e. the location—of a work as well as the spatial qualities of a critic’s writing as part of the meaning of the criticism itself. The process of designing the posters, as well as the final product, borrowed and reinterpreted elements of Rendell’s site-writing, focusing primarily on the importance of a subject’s location—being here, aquí—and asserting themselves within spaces.

Inside, but also between… Being welcomed into my good friend’s family space, I found myself in an untenable situation. That day I feigned being the girlfriend to a friend who yearned to introduce his boyfriend.

Participants taking up different coordinates of the School of Architecture's courtyard, during a mapping power exercise.

Participants of a variety of backgrounds, ages and sexual orientations participated and began their design process by retelling a story in which they—whether first or secondhand—encountered a moment of queerness. Bearing this anecdote in mind, they went on a walking tour of the building to look for a place for their poster to inhabit. To emphasize the spatiality of the exercise, each participant chose a preposition that both spoke of the site of their poster as well as embodied their queer story. Conceptualized as site-based works, the AQUÍ posters’ political meanings were thus not independent from the surfaces in which they were posted on—going against the very nature of posters, which are meant to be easily reproduced and quickly installed on any available surface—but rather created dialogues between the physical building, the story and the reader. Because each poster depicted a unique preposition that indicated a position, the stories were told from a first-person point of view, reiterating the role of individual bodies and subjects that inhabit Puerto Rican spaces, while reclaiming the building’s built, physical surfaces as agents that announce stories of queerness, such as when Rendell writes:

“These are stories about lives, yet despite the often powerful autobiographical elements, told as journeys; the narratives take spatial form, actively referencing special places, generating situated dynamics through various voices, and inviting the reader or viewer to take up particular yet often ambiguous and changing positions in relation to the work.” 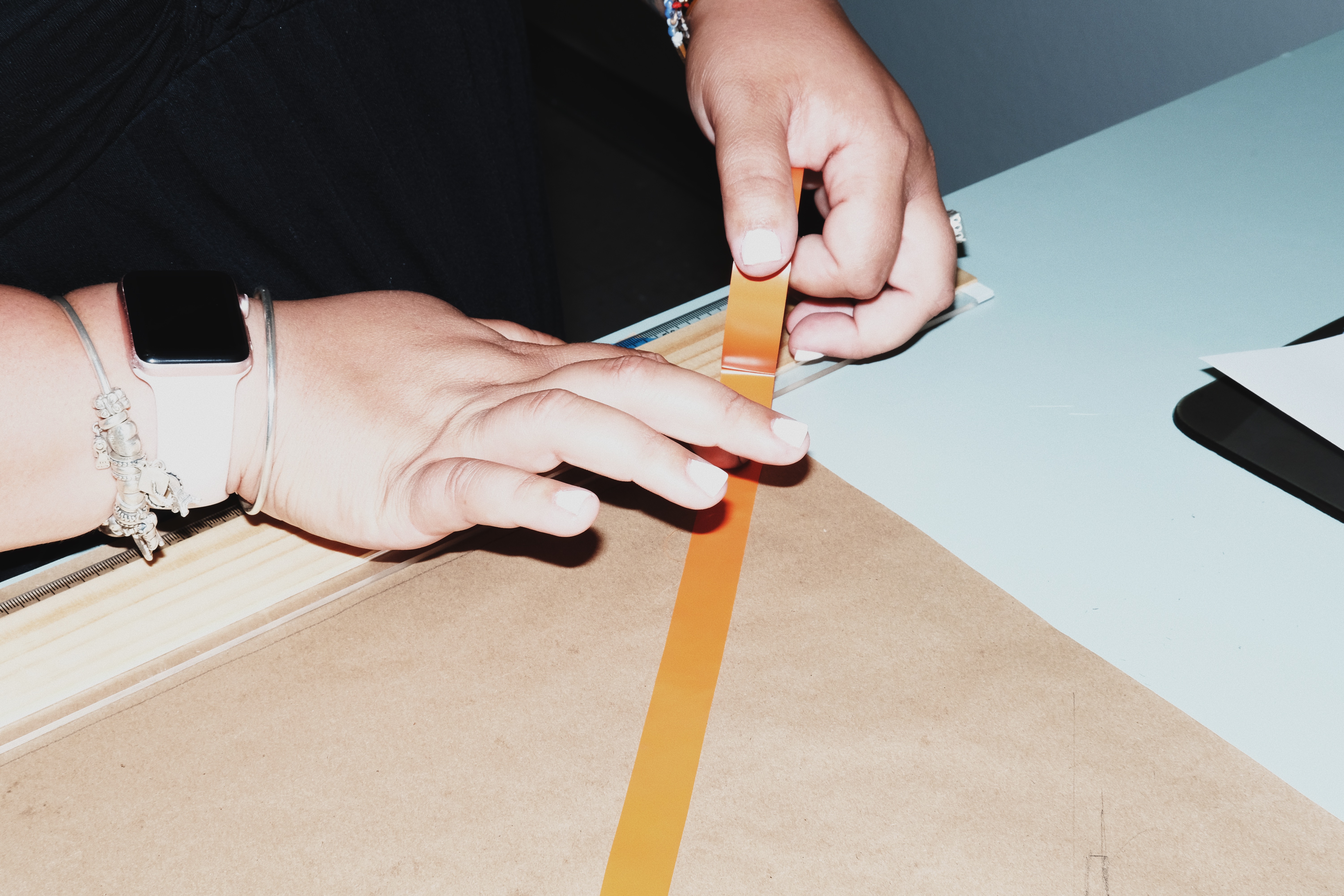 From the posters’ designs, alternate discussions on aesthetics and conventions are fostered; from their stories, there are political and cultural issues that arise; and from their individual locations in the building, alternate meanings can be extrapolated. For instance, each participant had access to the same materials: brown paper, electrical tape, masking tapes and Sharpies. The colored tape was intended to allow participants to create patterns, geometric figures and words without having to actually draw anything unless they wanted to—this ensured that participants who did not feel like they were good at drawing could create graphic compositions out of the material rather than on drawing skills. 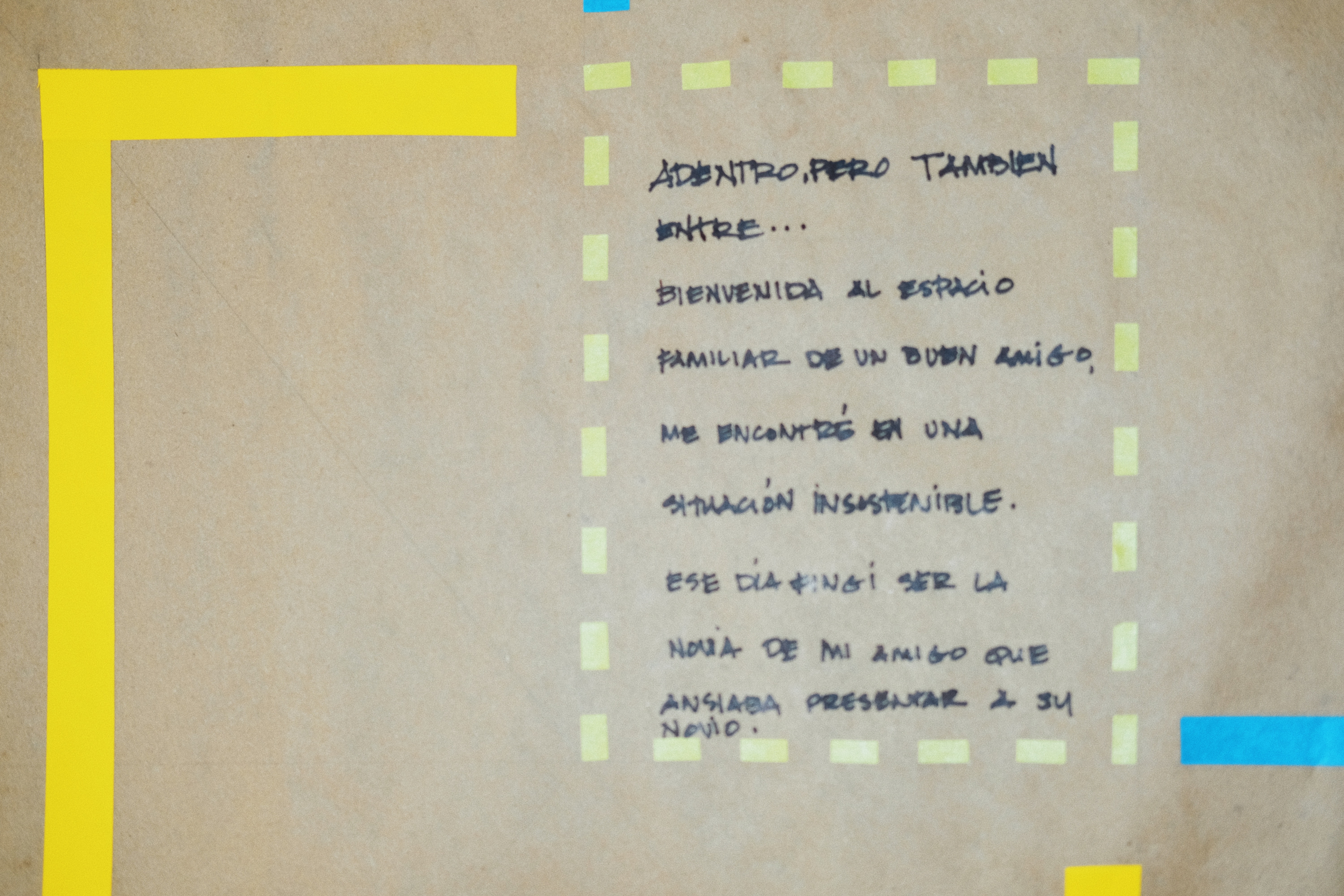 Detail of the hidden lines in the ADENTRO poster.

The creator of the ADENTRO poster—who told the story of the time her gay, closeted friend, without any warning, introduced her as his girlfriend to his family—framed her text within two overlapping rectangles. In the points of overlap, she deconstructed the rectangles’ solid lines into dashed lines. Rather fittingly, in architectural drawing conventions, dashed lines indicate something which is hidden. The location of her poster—the outside of the school of architecture, on the exterior wall adjacent to the entrance’s gate—acted as a point of contention of her selection of the preposition ‘adentro’—inside.

As I helped put up her poster, she further expressed how this experience filled her with discomfort, yes, but also with sadness. Her friend wanted to throw off any suspicion of his sexual orientation by using her as a decoy with his family, who living in the southern part of the Island, in the more conservative city of Ponce, were not accepting of homosexuality. These family dynamics unfold within the Puerto Rican domestic sphere, where the house becomes the site of struggle for non-normative identities. In addition, the ADENTRO story factors in another variable having to do with the Island’s cultural geography, in particular, the role machismo, tradition and religion play in the more conservative municipalities.

The posters were important design exercises because they broke silence, bringing to light Puerto Rican stories which could be otherwise disregarded and forgotten. Stories of LGBTQ people are often encouraged to be kept quiet, to be untold for fear of being found out. Here, the idea of ‘the closet’ becomes a space defined not by walls but by silence, reminiscent of Haitian artist Jean-Ulrick Désert’s writing about his experiences as a gay black man:

“I unwittingly walked into a large dark closet, unaware of its true size. Its architecture was not unlike what I already knew, its boundaries were fluid, sometimes only for a moment. It shared the same streets, the same people. Its only difference was silence—a silence that fostered and still fosters overwhelming complicity.” 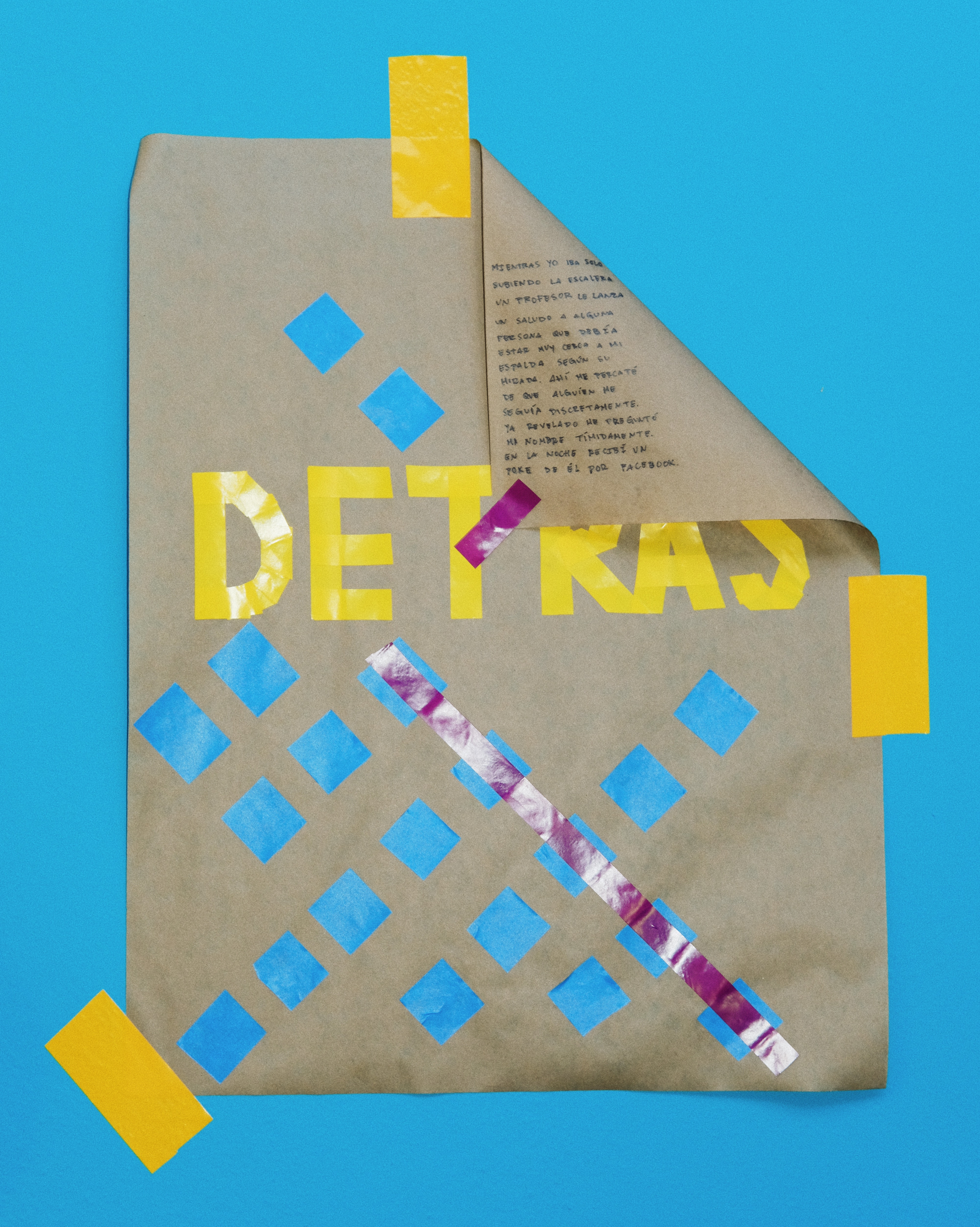 DETRAS poster, placed in the original location where the narrated event took place.

The ADENTRO poster told a story that—through words, lines and its site—illustrated how being inside the domestic sphere meant having to keep queerness hidden for fear of being rejected, of losing a place within the family nucleus, of being cast outside.

The same readings could be done for the rest of the AQUÍ posters and their locations, to extrapolate information, interpretations and meanings, such as in the DETRÁS poster, which was placed in the exact location where its narrated event took place. In this poster, we also begin to see the role of technology in Puerto Rican culture, particularly among Millennials. Here, the queering of space is extended, taking place not only in that particular location—behind the elevator, on the main staircase at the school of architecture—but also into the digital space of Facebook. The social network’s ‘Poke’ feature becomes an extension of spatial flirting practices. However, in the case of queer culture, the Poke also becomes a subtle hint, a digital action that discretely announces the identity of a non-straight person, in the hopes of being reciprocated. 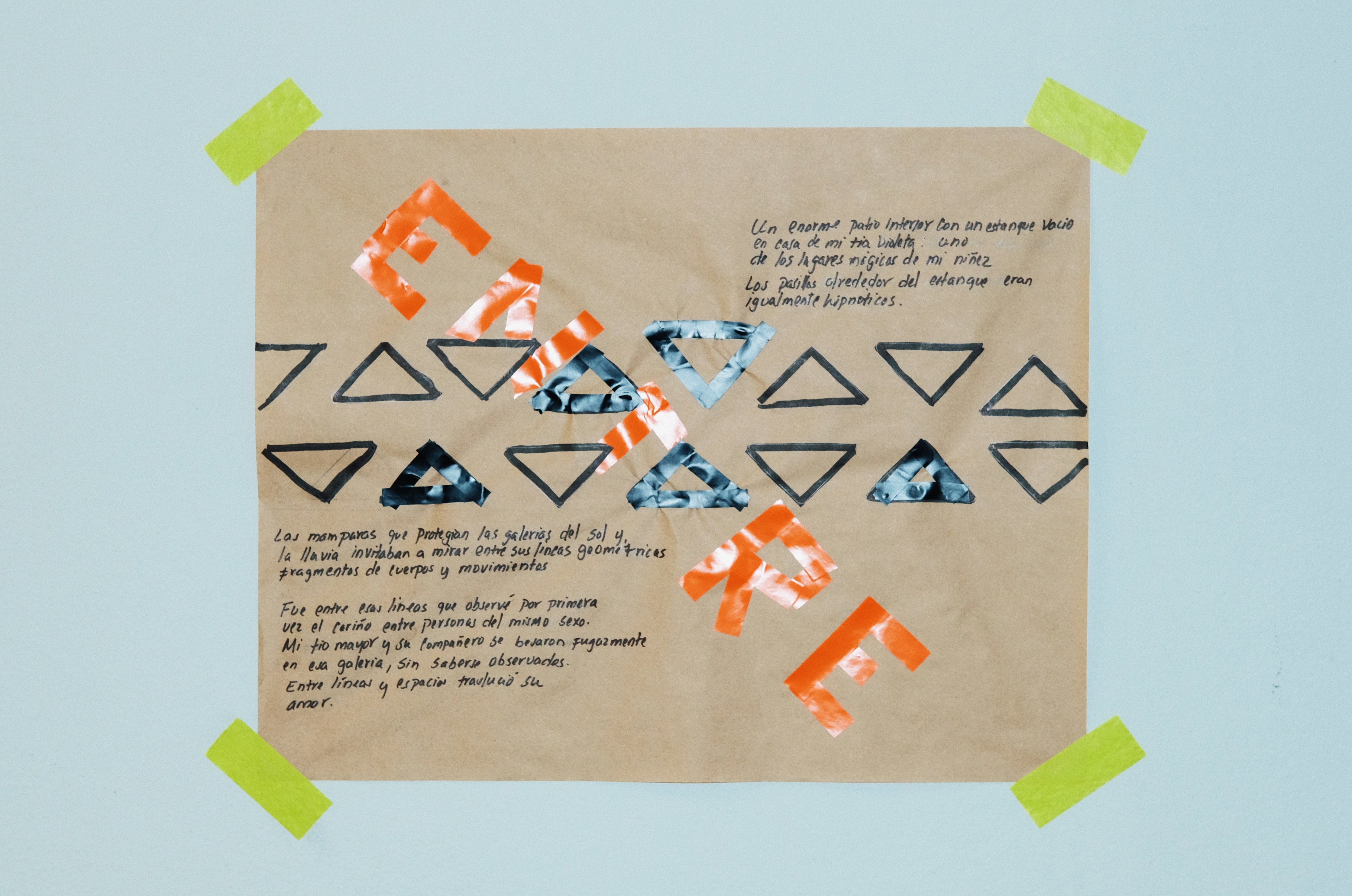 In the case of the ENTRE poster, tropical architectural elements—such as the mampara—are depicted as permeable boundaries that help partially conceal romantic practices between two men. The poster was placed on the wall behind a metallic, rolling gate that closes off access to the school of architecture during evening hours. As such, the reader’s interaction with the poster and the meanings they attributed to it, would vary depending on the time of day and their position in reference to the poster. Intended to be read between the metallic openings of the gate during the evening hours, the ENTRE poster’s location echoed its description of the mampara as well as the ephemerality of the queer moment it narrated; when the gate opens, the poster’s intention changes.

Queerness resists definition and knowability, and challenges normative structures and conventions. The AQUÍ posters destabilized the fixity and measurability of architecture (understood as built structure) by queering space through the multiple potential interpretations of the site-based installations. Narrated by localized, yet anonymous voices, diverse meanings can be rescued through the posters’ open-endedness and their resistance to being fixed, definitive visual cues. Themes, topics and issues emerge in each, inviting further research and much-needed discussions which will undoubtedly be picked up throughout the lifespan of this research project. Apart from reiterating certain concerns and highlighting others, the AQUÍ posters were helpful exercises that proposed alternate understandings of queer subjectivities, practices and spaces in Puerto Rico, and in this way, they begin opening new possibilities for the discipline while advocating for the validation of citizens which have been largely ignored in Puerto Rican architectural history, theory and design.