I love my grandparents' house, probably more than mostly anyone in my family. I sometimes think that growing up there is one of the reasons why I became interested in architecture. That house was my first home, the place I was taken to live right after being born because my parents were still in the process of finishing construction en casa. From my mother's womb to my grandparents' house, I became the miniature, ear-splitting new addition to an already full house: my two uncles, two aunts, my grandparents and my parents.

Even though the house belongs to both my grandparents, everyone in my family—particularly my cousins, sisters and I—refer to the house as la casa de Mama Lucy. It seems that one of the most ironic aspects of growing up in a patriarchal society, where father is breadwinner and goes off to work every day while mother stays to tend to the home, is that even though the house is financially supported by the man, its identity along with its sense of proprietorship is distributed to the matriarch. Houses are gendered female, not just because the domestic has been associated to femininity, but also because in Spanish, 'casa' is preceded by the article 'la': that which is feminine.

La casa de Mama Lucy is a rare sight in Aguada because it was designed by an architect, something which is rather uncommon in Puerto Rico. On a number of occasions, I've spoken to Mama Lucy about the house and its architecture, and I love hearing her tell its story—my favorite part being when she implies she designed over the architect's original design, scaling up the spaces because they were too small for her. I think she's probably not telling the truth, but if she is, she's got a natural, God-given skill for proportion.

Located at the top of a hill in the countryside of Barrio Piedras Blancas, Aguada—not that anything in Aguada is anything other than countryside—la casa de Mama Lucy is an exemplar of 1960s-1970s Puerto Rican architecture. It uses its site to create a variety of spaces split between four levels, on its two floor plans. The house possessed immense life when I was a kid, and I distinctly remember rather large parties and events taking place there—religious events, birthday parties and cultural affairs. These would take place in the gardens that surround the house, the pool area or in the house's interior. 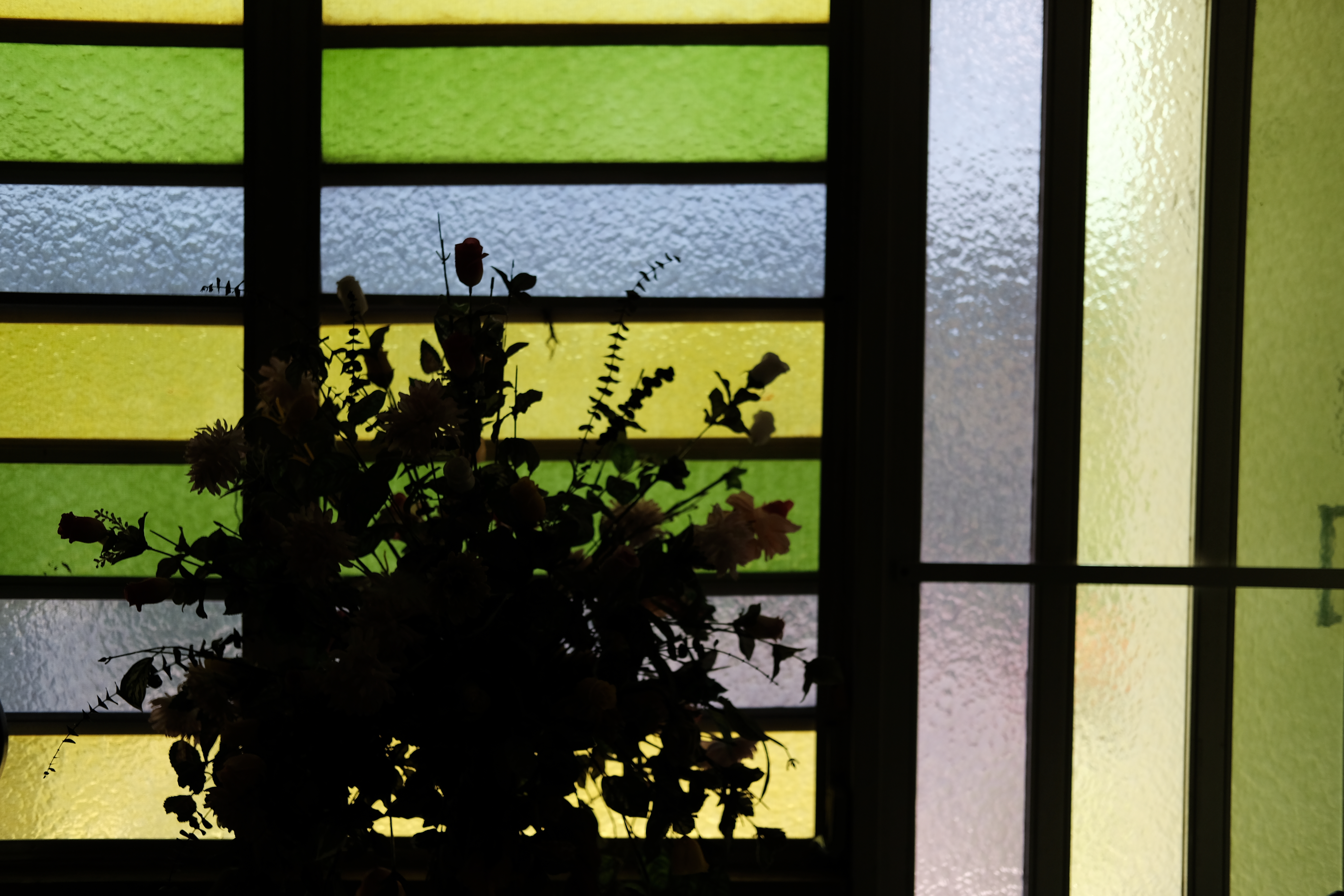 The house's reception with tinted windows and doors.

The house used natural ventilation and maintained an open floor plan throughout the majority of the public spaces. The main entrance to the houses is located on the south facade, with wide slabs of gorgeous marble about three feet deep leading up to the door—in itself a spectacle composed of green, purple and yellow pieces of acrylic cut into rectangular patterns. That part of the facade is treated this way, meaning that in its interior, that reception space possessed a completely different quality of light than the rest of the house. I recall it having real cinematographic quality to it, transporting me within a beautifully tinted film, a church or a theater perhaps.

The reception space is the core of the house, the space that distributes its inhabitants to the different areas. Once you walk up the marble steps (which then make their way inside to every square inch of the house's interior) and in through the colored doors, to your right a small staircase descends into the marquesina, the small kitchen and a guest room—and to be honest, this doorway, in practice, became the main, daily entrance to the house. A mural of a waterfall adorns that back wall, as if going down and through the doorway, leads you back into nature. Similarly, adjacent to mural, a wider, more ceremonial staircase with a tiny skylight, ascends into the most private area of the house: the five bedrooms and two bathrooms.

But upon entering the house through the south facade, the first thing visitors see right in front of them is a beautifully crafted, wooden partition wall that gives a sense of privacy, intended to allow a maximum flow of wind with minimal visual obstruction to the formal living room. To enter, I remember having to push the door, cleverly camouflaged into the woodwork's delicate, curved column-like posts, to then go down two steps. Then, a glass wall with sliding doors, located on the north facade of the house, invites the user to go out to the generous, wide balcony that opens up the view to the lush landscape.

This living room was hardly ever used. Mama Lucy says that it was mostly useful in formal occasions where my grandfather held meetings with politicians and colleagues. The men would talk shop in that space, while the women—the wives—would find their way left of the reception space, and into the kitchen, the informal living room and the formal dining room.

This was, in truth, the liveliest of spaces. The amount of cooking done in that kitchen echoes in my mind, having witnessed some of my favorite meals by the most spectacular chef: my grandmother. The kitchen was separated from the living room by a long bar that sits six people in stools with honey-tinted acrylic backrests. Across the entire bar's surface, on the living room's coffee table and side tables, my grandmother used porcelain and blown-glass figurines to decorate the interior. A diamond shaped mirror, with a lovely painting of flowers and foliage over its surface, decorated one of the walls. Patterned wallpapers and bold decorative tiles that didn't shy away from color adorned many of the spaces, including the living rooms, the dining rooms, the master bedroom and its master bathroom. These last two in particular were the most impressive, with the former being covered in sky blue wallpaper with organic patterns in a velvet-like material, and the latter being made up of blue and orange tiles that perfectly complimented the golden bathroom fixtures (there's photographs here). 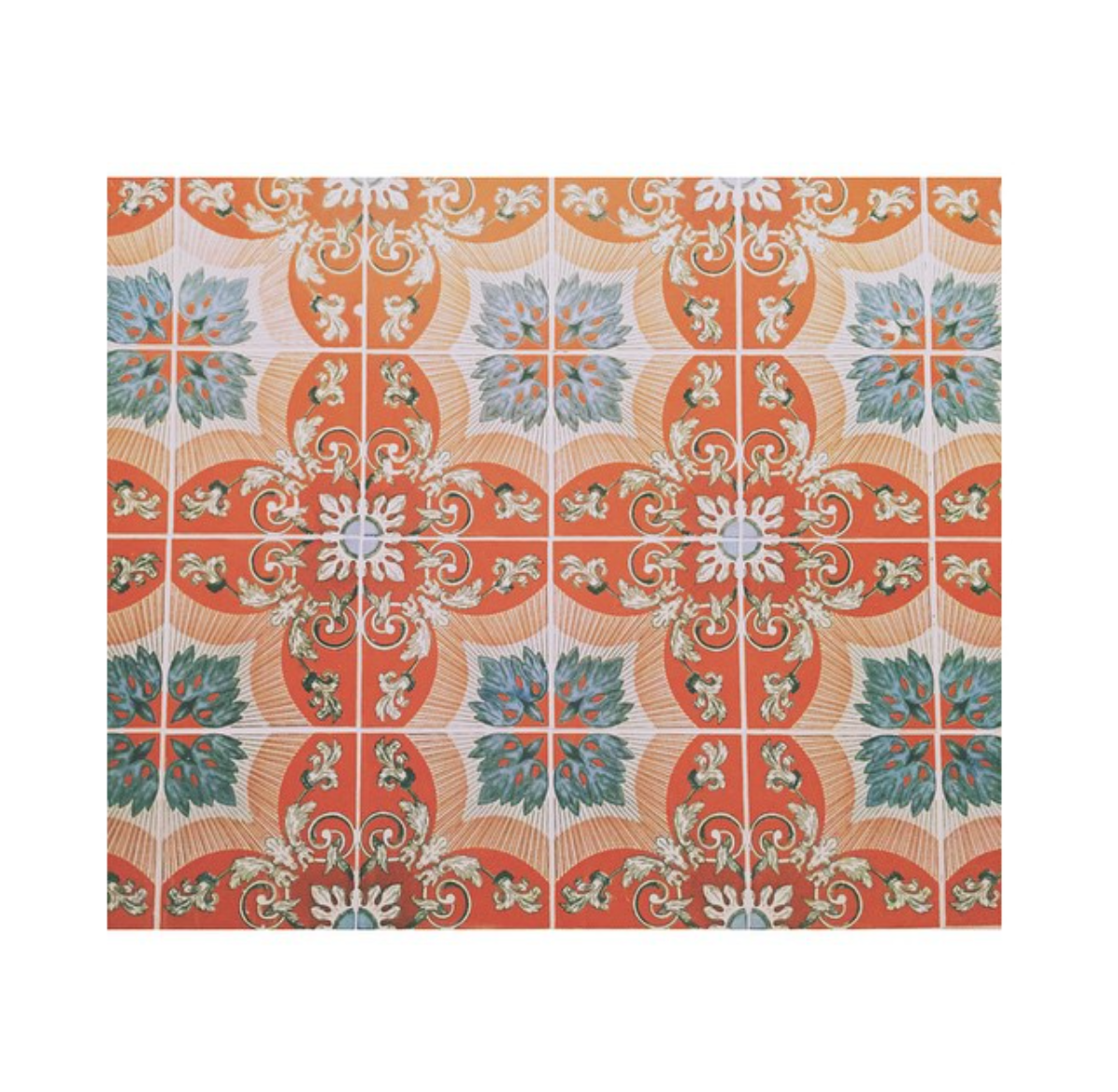 Back then, my grandmother had very baroque, but delightful taste in decor. Extravagant? Always. Excessive? At times. Boring? Anything but. I'm not sure what the house's architect would have thought about it, but I loved it then as a child and I still love it now. I can't deny that my grandmother's aesthetic has somehow found its way into my own. I spent so much time with her as a child, that looking back now I see it's impossible for her flair to not have imprinted on me, to not have had an effect on what kinds of colors, surfaces, shapes, objects, textures and materials I would relate and be drawn to as a designer. When one day she's no longer here, I'll have inherited, not the house, but her disposition towards kitschy objects, perfectly curated to make un hogar, to infuse it with meaning. And personality. 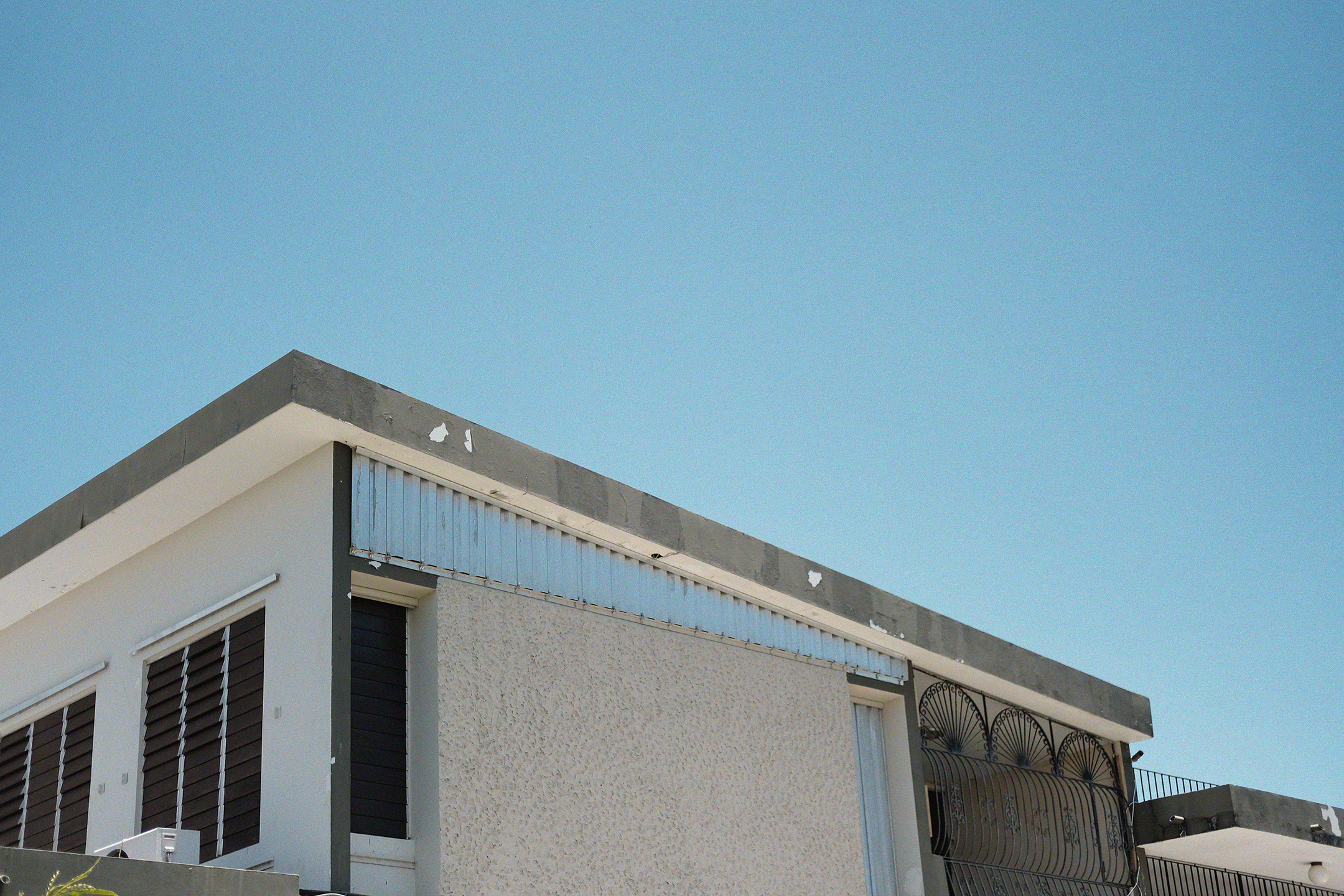 Today, though, the house sleeps. The split levels have become unkind obstructions to my grandparents's knees, back and joints, who in their 80s and 90s, find it difficult to navigate up and down flights of stairs in such a large house. Most of the acrylic windows and glass walls no longer let the sunlight through, as tormenteras—aluminum panels used to protect our homes from Hurricanes—cover them. The tormenteras have now practically become fixed additions to several of the house's facades. 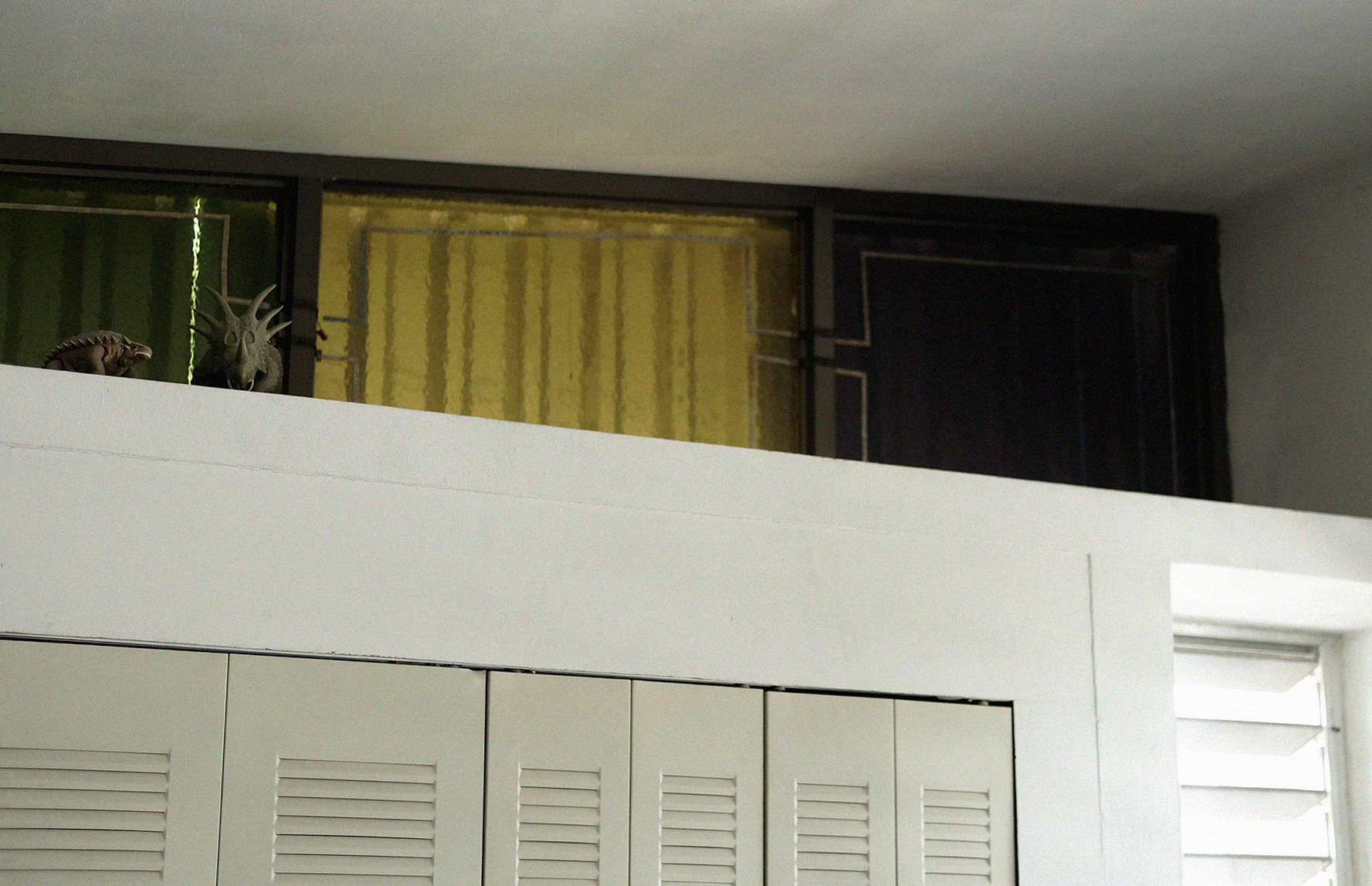 Now, I'd love to see videos and photographs of la casa de Mama Lucy at its prime. "Yo no tengo fotos de nada de eso," she told me last weekend, but I suspect she just didn't want me trying to find them and making a mess—a character trait I've never been able to shake off ever since I was a child). It's a shame really, because I'd especially like to see pictures of that time Governor Romero Barceló came over for dinner and his security detail used the house's roof as a mini-military base (I love hearing my grandmother tell the story, because she gets so riled up and upset about it). But I'm also glad that every time I visit the house, flashbacks of my childhood keep it alive for me—truthfully thanks to the very many, many, many, many visual, graphic, textural and flamboyant aesthetic cues my grandmother embedded the house with, and that still remain. 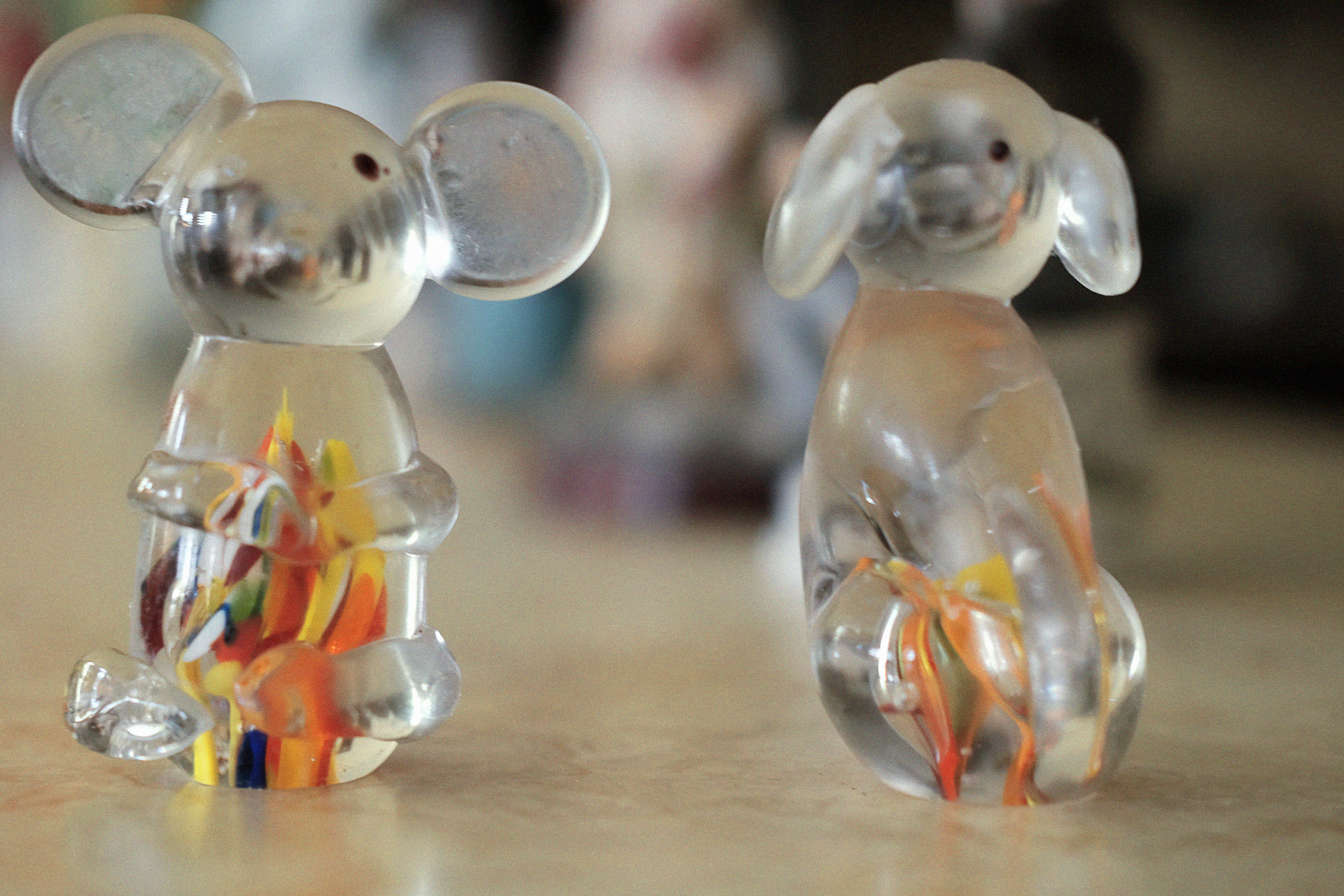